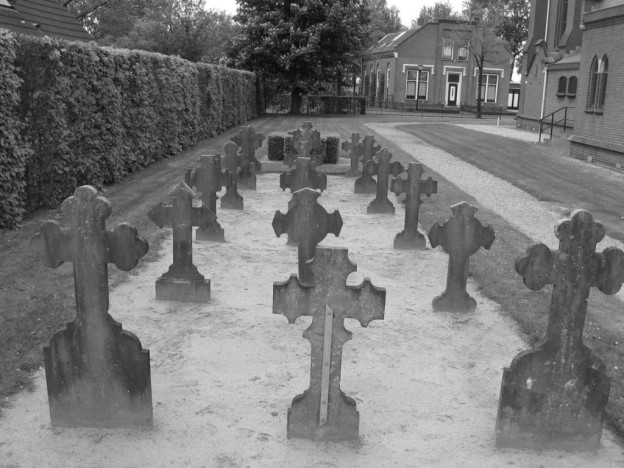 18 is a documentary art film that explores the role of ritual in the rural community of Lierderholthuis, the Netherlands. The work is inspired by my interest in the perception, utility and practice of ritual in rural communities, in the context of the post-modern era. The work is also informed by the philosophy of Joseph Campbell (1904-1987), who argued that universal symbols and stories bind communities together.
As a documentary art film, the work is distinguished by the consciousness it provokes at the intersection of facing individual spirituality, mortality, social history, and community identity.

The visual language of the work, particularly the juxtaposition of photographic stills and text, supports a contiguous relationship between the past and present. The imagery revealed is of the village of Lierderholthuis and St. Nicolaas’ Roman Catholic Church cemetery- where 18 anonymously  tombstones stand in anomalous space. The history embedded in the tombstones reflects the oldest known historical narrative about the individuals who once inhabited the village of Lierderholthuis. The text is drawn from extracts of 18 randomly collected interviews that were conducted with contemporary inhabitants of the village. As the work unfolds, each tombstone is anthropomorphized through the careful illumination of the first name on the stone, accompanied by text derived from the interviews. In succession, a series of messages, arranged from apathetic to passionate, is revealed.

As the inhabitants of Lierderholthuis reveal their perceptions on the role of ritual,  a universal access point of reflection- one which engages the historic past, contemporary present, and future, is enabled. In doing so, the work exposes the tension between the fields of subjectivity and objectivity, provoking the viewer to reflect on and participate in the process of ritual. 18’ is a catalyst for the process of remembering all that lies in the both comforting and unsettling mythic past, unmasking the fragmentation of our own individual traditions within historical and regional continuums.

The community of Lierderholthuis, the Netherlands
Gabor Dobi