American Document is a project which explores the history of the Great Depression and the New Deal era (1933-1945), through the lens of historic archival materials. Through the creative manipulation of documents and documentary photography, formal and experimental modes of documentary storytelling are applied to dispel the myth and ethos of the Roosevelt Administration, enabling revisionist interpretation to one of the most turbulent periods in American history. American Document consists of a database documentary (American Document 1935-1944), a documentary book (What We Are About to Receive: Historical Voices from the United States Farm Security Administration Archival File), articles, exhibitions, and public presentations.

American Document: Deconstructing the Legacy of the New Deal in the Farm Security Administration-Office of War Information Photographic Archive 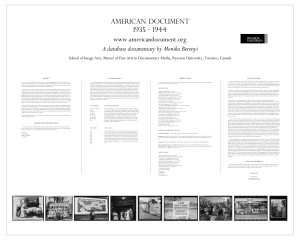 Since the conclusion of World War II, the ethos of the Roosevelt administration (1933-1945) and the achievements of the New Deal era have been celebrated and propelled by official rhetoric. American Document is a database documentary which challenges and deconstructs the validity of this long-sustained authority in the United States.

Between 1935 and 1944, the United States Resettlement Administration (1935-1937), Farm Security Administration (1937-1942), and Office of War Information (1942-1944) contributed to the formation and capture of a panoramic portrait of America in the form of a monumental photographic survey. Collectively, these photographs constitute the historic Farm Security Administration-Office of War Information archive and impart an unparalleled documentary account of the New Deal era. Through a creative manipulation of archival photographs drawn from the FSA-OWI archive, American Document reveals the stories of an enduring people whose lives coincided with one of the most turbulent periods in American history. In an era characterized by the effects of the Great Depression and World War II, American Document engages a specific economy of archival evidence to question and illuminate how state socialism was imposed on an unsuspecting people at the expense of individual liberty, free enterprise, and the ebb and flow of the American dream. American Document is inspired by the documentary tradition of representing others, and provokes the audience to assess and consider the New Deal era history in the presence of archival evidence, latent truth, and the artist’s voice. American Document is presented at the IMA Gallery as an interactive installation on web platform.

What We Are About to Receive, Historical Voices from the United States Farm Security Administration Archival File, is a documentary work, presented in the artist’s book form. The work engages the process of enabling new narratives and historical knowledge from archival source material, and reflects a critical examination of the FSA-OWI archival file at the intersection of New Deal era American history (1933-1945). Postured in a revisionist voice, and delivered in the form of a socially conscious art production, the work challenges traditional conventions and frameworks which support the processes of historical narrative production. In further detail, the physical structure of the work serves as a subversive exhibition space for deconstructing the Roosevelt administration’s New Deal era economic policies- many of which surreptitiously fostered and cemented the rise of the American welfare state. Through the juxtaposition of original primary source documents and legislation, FSA-OWI archival file materials, and creative prose, the work illuminates the Roosevelt administration’s stealth modus operandi and the FSA-OWI file’s enigmatic position as official artifact of the New Deal era. As a composition, the work is an expression of the disciplined writing of narratives from archival material and the processes which shape the production of art.  What We Are About to Receive is also an appeal to the reader in the present, to consider: the importance of reassessing historical narratives and archival materials, and the valuable role of creative platforms in the dissemination of historical knowledge.  The work may be of interest to: the discerning public; students of American history, artists who work within a socially conscious practice; practitioners of documentary; curators; and archivists.

Additional Notes
The following references indicate some of the more important works consulted by the author in the preparation of this work. These references are to serve as a guide for those who want to pursue, in greater depth, the various ideas and conclusions considered here.

The indictment of Franklin Delano Roosevelt is an extract from a revisionist documentary work, created in the form of an artist’s book (What We Are About to Receive: Historical Voices from the US Farm Security Administration Archival File), that functions as a platform for (re)evaluating the mythological ethos of Franklin Delano Roosevelt’s New Deal era economic policies. The critical work deconstructs existing perceptions of history through the subversive juxtaposition of primary source documents, images from the FSA-OWI photographic collection, and newly constructed oral histories.

During the time of the Great Depression, it is charged that the President willfully declared war on the people of the land in an effort to eliminate individualism, and to permanently buttress intrusive and costly government.

It is charged that the President acted without authority from the Constitution when he closed the banks on March 6, 1933. He understands now that there are people out there who would rather die than have their lives saved in an unorthodox way.

The President is charged with having violated the Democratic platform which promised a sound currency. The President politically mediated breach of contracts as to both paper currency and debts: terminating the domestic redemption of all currency in gold; and outlawing and repudiating all private and public contracts and other debts that required payment in gold. In and of itself, the aforementioned remains the largest singular political fraud in American history.

It is charged that the President supervised the Federal Reserve’s mismanagement of the money supply.

It is charged that the President not only violated the liberties of businessmen and farmers, but also those of future generations who never had the chance to officially agree to the terms of the New Deal.

It is charged that the immemorial liberties of a free press have been subject to irreparable harm.

It is charged that the President suppressed the organic flow of generally accepted standards of fair competition, and thus, misrepresented goods, services, and job opportunities to the people of the land.

It is charged that the President regimented the entire labor force into increased labor, increased wages, and increased public improvements at the cost of freedom.

It is charged that the President has taught the people of the land to think of the government as a benevolent institution designed to protect them,and to help them make money, and to think of independently minded individuals as soulless opportunists and machines that have no interest in the common people except to make money out of them.

It is charged that the President has put the government into business, into what is called “competition with private business”. It is charged that the President pushed the government into the private business of making unsecured loans to the people of the land, at a cost of billions of dollars, placing exorbitant strains on the national credit system.

It is charged that the President failed to comprehend the reasons why the loans were never repaid.

It is charged that the President regimented and violated agricultural production by interfering with the inalienable rights of farmers and sharecroppers. The President, through various alphabet agencies such as the FCA, RA and FSA, proffered irresistible forms of friendship, programs, loans, aid, and benefits. The aforementioned were systematically delivered by Washington bureaucrats who operated through local committees, and farmers and sharecroppers were ensnared by what appeared to be attractive forms of self-government.  Thenceforth, the people of the land have been tied.

It is charged that between 1933-1945, the President prolonged an unnecessary state of fear in the minds and hearts of the people of the land.

How does the defendant plead?