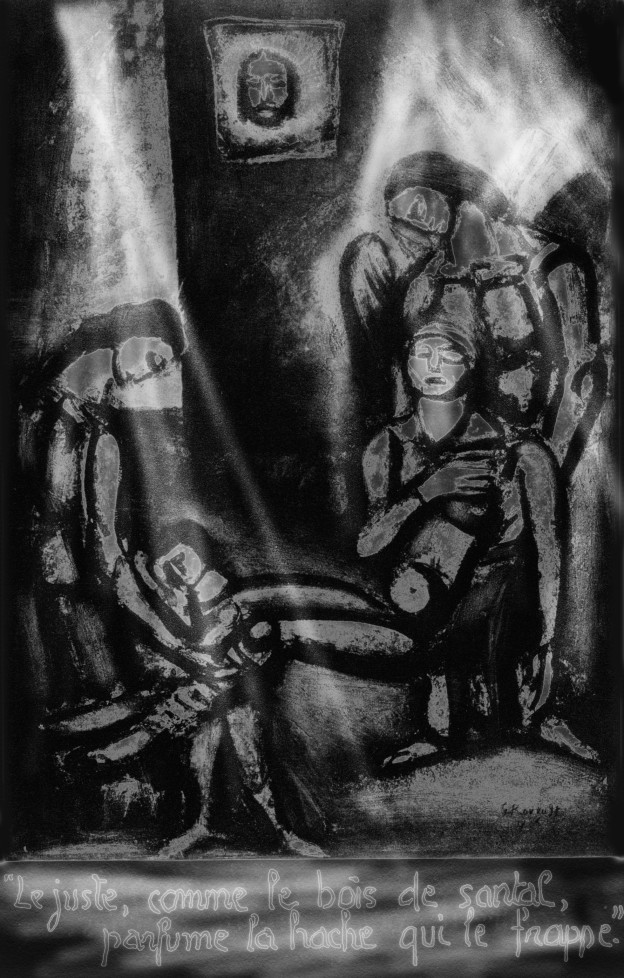 My project is a visual poem of moving images and sound. The work is inspired by a cycle of photo-engraved copper plates that was created by French painter, Georges Rouault, between 1914 and 1927. The original cycle was entitled Miserere (which translates from the Latin as Have Mercy -taken from Psalm 51), and served to convey the artist’s spiritual legacy of faith.  My work, entitled Miserere et Lux (Have Mercy and Light), is an extension of my relationship with Rouault’s work and an illumination of my belief in renewal and rebirth.

The images are presented in serial format, and accompanied by phrases and proverbs in both the French and Latin languages. The texts serve as threads to the project’s cohesive whole rather supports to the individual images. The sound is taken from the third movement of Henryk Mikolaj Górecki’s Symphony No. 3, Op 36 (Symphony of Sorrowful Songs, Lento – Cantabile Semplice).  In this project, it was my hope to reach deeper into who I am, where I have been, and where I am going.

For the viewer, the work may be received as a poem in the form of a visual narrative. While the attention of the viewer is provoked to examine the work, it is the intrusive nature of the visual poem that succeeds in entering into the personal, contemplative space of the viewer. As a cohesive whole or as individual parts, one may question: what do the images, text, and music mean? The question remains: is it even necessary to really know?

The original 58 plates have been rendered and interpreted to enable a new narrative in the form of a visual poem. Using After Effects, the images are delivered in serial sequence format, accompanied by text and music, and prefaced by an introductory verse. My choice to apply solarization and painterly techniques to the individual images are explained as follows: the engagement with Photoshop provided a platform to explore the digital processes of painting, and the solarization filter facilitated an illumination quality suitable for creating a new iconographic layer to the original plates. The utilization of tools, filters, and editing techniques was consistent throughout, so to insure the production of a new series within an original framework. Spray paint has been applied to the text as a symbolic gesture, signifying that behind every shadow, there is always a source of light.