This tour introduces the viewer to the visual art of William Kurelek (1927-1977), through the extensive Kurelek Collection held by the Art Gallery of Ontario. Specific emphasis will be placed on social, historical, and geographical contexts as well as artistic techniques, thereby equipping the viewer on how to read Kurelek’s work. Conversation and debate are encouraged, and all are welcome.  Below is a list of the current Kurelek paintings on display:

This tour utilizes holdings found in the Sigmund Samuel Gallery of Canada (Canadiana Collection) and the Daphne Cockwell Gallery of Canada (First Nations Peoples) to explore how works of visual art function historical records and distinct visual languages of Canada. Emphasis will be placed on the role of visual art as a primary source document of Canadian History, and how visual art has been influential to the evolution of Canadian national identity. The works of Paul Kane (1810-1871), Cornelius Krieghoff (1815-1872), Rex Woods (1902-1987) and Arthur Heming (1870-1940) will be juxtaposed and debated. All are welcome. 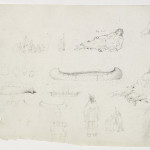 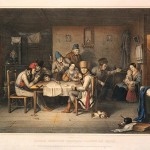 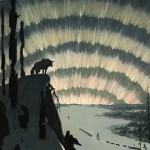 The Robert J. Flaherty Collection is a reflection of the filmmaker’s documentary process, and captivation with the Canadian North and Canada’s Inuit People. Robert J. Flaherty (1884-1953) began document the Inuit in 1913, when he was commissioned by the Canadian Northern Railway to search for iron ore deposits along the Northeast coast of the Hudson’s Bay (Belcher Islands). Flaherty had been encouraged by the Canadian Northern Railway to document his journey, and in doing so- amassed a sizable body of both personal records and Inuit artifacts. In the following decade, the Inuit and the North would inspire Flaherty’s Nanook of the North (1922) – a work which brought his international acclaim. Although Flaherty is considered to be a progenitor of documentary, it is critical to note that his work falls under the auspices of salvage ethnography and this his documentation process was random. Thus, the Robert J. Flaherty Collection is much a record of Flaherty’s personal travels, interests, and whims. The majority of items in the Collection are from Baffin Island. This tour will emphasize and discuss Flaherty’s documentary process in the Canadian North. All are welcome.

To schedule a tour or commission the research and development of a new tour, please specify request through Contact