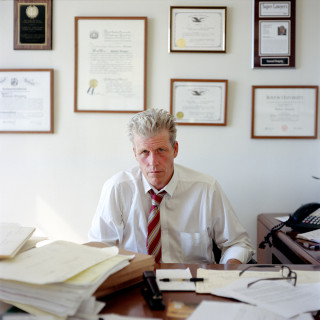 Public Defenders is a project which utilized multimedia documentary techniques, archives, and community networks to address and contrast critical topics pertaining to the criminal defence law profession, in both Canada and the United States. The project was presented in the form of a multimedia installation at the Scotiabank Contact International Photography Festival, and was supported by a publication (Public Defenders: The Transmission of an Ethnographic Portrait).

Public Defenders: The Transmission of An Ethnographic Portrait
A curatorial essay by Monika Berenyi

In a contemporary world informed by the information revolution, technology and the database have heightened the value of media forms as evidence of truth about the human experience. The transmission of these visual communicative forms reflects the interdependent nature of data, while illuminating broader referents to what may constitute as the human experience. The materiality of these forms are an invaluable resource to research and production in the broad discipline of the humanities. The cultivation and presentation of multimedia documentary work is also a burgeoning practice- one which poses an important challenge to the aesthetic dominance of linear documentary. Dan Epstein’s Defenders is a project which utilizes multimedia documentary to explore the criminal defence law profession in three cities: Detroit, New York, and Toronto. In this pioneering work, we witness how creative use of technology, ethnography and documentary coalesce to transmit a factual portrait of individual experiences, calling for civic reflection on the meaning of criminal defence.

Defenders began with Epstein’s pursuit of self-ethnography, where introspection actuated a narrative derived from familial connections to the criminal defence law profession. Epstein, who was raised in the border town of Detroit, was also motivated by his own frustrations with public misunderstanding of the criminal defence system in both Canada and the United States, especially regarding: legal aid, police abuse, and racial profiling. Epstein’s self-ethnography guided a courageous search for difference, which resulted in a collection of diverse viewpoints distinct from his own. The artist’s journey was also guided by American historian James Clifford’s advocacy of new conceptualization methods in the field of anthropological studies in the era of postmodernity (Routes: Travel and Translation in the Late Twentieth Century), and a personal fascination with the camera as a communicative tool. Epstein’s modus operandi may be described as a process of travel, field research, and communication, where culture was “put into motion”, resulting in the production of a new database of documents. While the camera functioned as the entry point into the social world of criminal defence, the capture of oral testimony and portraiture became platforms for the expression of meaning. The artist’s curious yet subtle interviewing style resulted in a database of richly detailed narratives, expressed in a native vernacular. The quality of these new interpretative documents is reminiscent of the Federal Writers’ Project life histories, where oral testimony was used to compile a portrait of America at the height of the Great Depression. Epstein’s style also brings to mind the work of Studs Terkel, who took conversation to a new level by stylizing oral history as a popular literary form in his panoramic compilation of narratives, describing the daily lives of working class Americans (Working: People Talk About What They Do All Day and How They Feel About What They Do).

In Defenders we bear witness to an experimental creative process- one which utilizes travel, communication, and media to bridge and articulate the quality of difference in the criminal defence law profession, in a transnational context. It is here that we see how diverse backgrounds, varying politics, divergent locales, and private vs. public domains form the matrix of a greater story. The breadth of the work also suggests Epstein’s aptitude for negotiating the complexity of the documentarian’s insider-outsider dichotomy. Ultimately, Defenders is a signpost for how and why dissonance and pluralism are relative to the construction of cultural paradigms.

Defenders is rendered here in the gallery setting as a multimedia documentary installation, with materials drawn from a project comprising of a database of digital videos and portraits. The installation affirms the pedagogical function of the gallery space while illuminating the value of documentary media to humanities discourse, especially the field of ethnographic studies. The design of the installation is deliberate, immersive, and interactive, so to encourage motion, experiential learning, and acknowledgement of fragmentary truth at the intersection of the gallery space. As the installation illuminates the qualitative value of oral testimony as an interpretive primary source document, the gallery space provides a neutral platform for the exploration of content and opinion. The installation brings attention to the value of multimedia documentary as a vehicle for audience engagement and social enlightenment, transmitting the much broader message that all realities are inseparable from greater social questions.

The installation is also an extension of Epstein’s self-ethnography, forming a personal editorial reading of the database he amassed. A single video loop, composed of select narratives purposely strung together, runs in tandem, on 2 separate LCD screens, flanked by portraits of Sam Gregory, Charles Roach, Natasha Webster, Mark Krieger, Andrew Densemo, Rick Helfrick, Bob Walters, Angela Chaisson, David Epstein, Jonathan Epstein, Michael Fairney, and David Midanik. At the centre of the gallery is an artefact of Epstein’s self-ethnography: a framed copy of the United States Constitution from his father’s Law Office. The motley of narratives provides an arresting window into the intricacies of the artist’s hunter-gatherer regimen of data collection. As the transmission of content is underscored by an ominous voice, with a guarantee that “you don’t have to say what you don’t want”, it is also understood that the individual is acting autonomously, on behalf of themselves. Through the convergence of spoken word, performative gestures, and still images, an ideologically distinct portrait of the everyday lives of criminal defence lawyers is drawn. The content ranges from indictments (“I would never trust the system,” says Ken Montgomery) to staunch defences of their own work (“Why would I do this if I didn’t care?” asks Desiree Ferguson) to anecdotes of justice gone sour (“And who always gets fucked?” asks Sam Gregory, “It’s always the kid from Brownsville or East New York or Bed Stuy, whose families [sic] get shit.”) As the realities expressed reveal the psychic interior of a largely misunderstood profession, the testimonies demand engagement with an audience, in a measured space. It is here that the audience is challenged to face, consider, and possibly embrace a new social context- one which transcends the monotonous world of stereotypes, prejudices, misleading agendas, and other preconceived notions of truth.

The database which the installation is drawn from is a place of ambiguity, supporting a collection of new interpretive documents which lie between official narratives and counter-narratives. As such, the database is a critical cultural construction, where contradicting narratives peacefully co-exist, widening the space for public interpretation. The database is also a place of catharsis for the individuals, where testimony serves in their own defence. Through the transmission of difference, we witness an undeniable call for reassessment of the basic principles of human rights. For a community which provides counsel and advocacy to complex circumstances such as: violence, trauma, false accusation, and incarceration, the hierarchy of crime is also a hierarchy of victimhood.  Epstein’s database details a social universe in which the human rights supposedly won during the Civil Rights Movement seem no longer to apply, bringing to mind the groundbreaking discourse revealed in Michelle Alexander’s The New Jim Crow: Mass Incarceration in the Age of Colorblindness. As Defenders reveals a paradigm for research and production to the various disciplines which attempt to re-evaluate questions of criminal justice in the postmodern era, the analogy drawn to Alexander’s work suggests a course for a far greater cause. It is through examining the justice system as a profession, that we hear an even greater social narrative- one which illumines the striking similarity between the Canadian and American criminal justice systems, especially in regards to the diminishment of personal freedom.

Defenders is a featured exhibition at the Scotiabank Contact Photography Festival